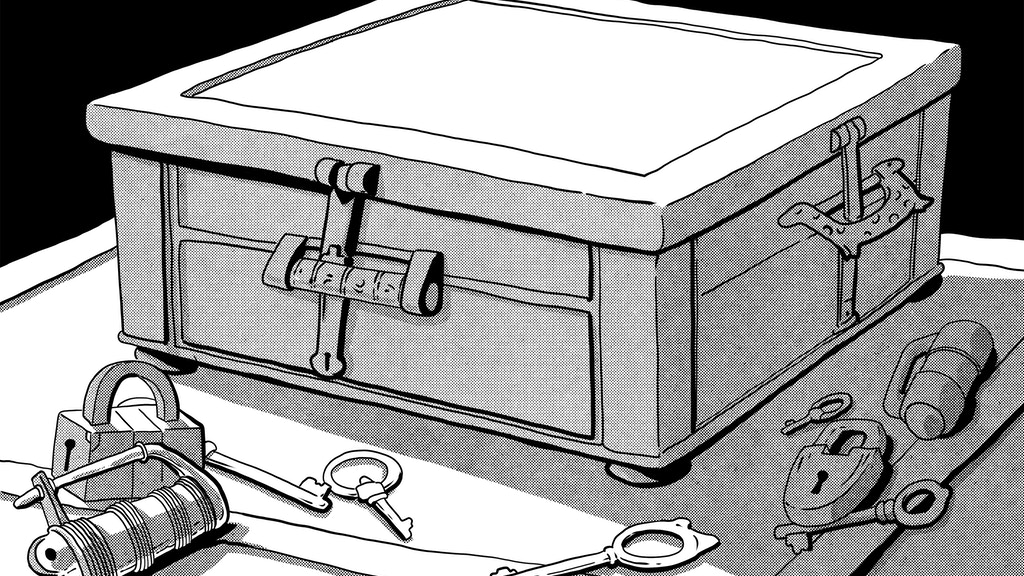 Lock and Key - A Mini-Book for 5e, PF2, and Savage Worlds

Latest Updates from Our Project:

Meanwhile I've written over a third of Code and Cipher, and still am aiming to have that out by the end of September. FYI, I'm considering renaming it, because it also talks about other ways to pass secret information like invisibility ink, though I don't know what I'd call it if I do.

I like to know where I'm going at least one book ahead of schedule, so I've started voting for book four  in this This and That series over on the Patreon page. Book four will be the first book funded by Patreon rather than the Kickstarter.

Instead of the massive list of every idea, this time I'm focusing on three topics that I'm excited about and that were popular in the previous poll: books, games, and light sources. If you want to see any of these come to life Lock and Key style, join our Patreon and vote now.

Voting ends on August 7th at 2 pm CDT, so don't miss out!

While all that is going on we've started working on our next Kickstarter campaign: Good Little Children Never Grow Up.

Four children have disappeared into a haunted orphanage. Only the heroes can rescue them. As they search the orphanage for signs of the children, they uncover the dark secrets of orphanage's past.

Good Little Children Never Grow Up is a short low-level adventure for 5e, Pathfinder 2e, and Savage Worlds. We plan to launch in late August and will have the PDF out to backers in time for Halloween. You can sign up for launch alerts on the Kickstarter preview page.

That's all for now. I hope to send you another update soon when Rope and Chain is complete. I'll leave you with the cover.

The biggest milestone this month is that I finished the first draft of Rope and Chain. (Behind the Scenes Patreon backers can get a sneak peek). It still has to go through a couple more rounds of edits, plus the conversions to Pathfinder and Savage Worlds, but I still think all the versions should be out by the end of the month.

Art is also underway, and I've gotten sketches back from one artist already. The other artist has let me know she probably won't have the full illustrations until the end of July, so that may well be the last piece that we end up waiting on.

I'll leave you with one my favorite sketches for Rope and Chain: everybody's favorite half-snake/half-mimic, the snimic.

Lock and Key is now out on DriveThruRPG for 5e, Pathfinder, and Savage Worlds. You should have gotten an email from DriveThruRPG with a coupon code for whichever of these your pledges included. If not, let me know either through Kickstarter or by emailing sneakattackpress@gmail.com.

One of you marvelous backers has already left a five-star rating and review on DriveThruRPG. Thank you!

I'd always love to hear more of people's thought, and leaving customer reviews of DriveThru is a great way to let other people know about the book. It takes only seconds to leave a rating, and reviews can be short and sweet or as detailed as you want.

Meanwhile work continues on Rope and Chain. I'm about two thirds of the way done and with Lock and Key out I have more time to focus on this. I should be able to finish the writing by the end of the month and have it out as a PDF in July. Here is the updated outline, starred items are already written. There's also still room for a little more if you have other things you'd like to see.

I've also stared to do a little work on Code and Cypher. The most concrete thing I've done is write up a single magic item, inspired by the Voynich manuscript. It's a crazy magic book that your character can slowly decode, with each page revealing something new based on a random table. I think that soon I'll be posting a preview of it on the Patreon Page.

Now that you've got a chance to look at Lock and Key, if you enjoyed it and want to see more like it, please support our Patreon. I won't start charging these until book four is released, but pretty soon I'm going to start posting some of the behind the scenes information and we'll be voting on the book four topic before too long).

For Code and Cypher I will continue to give the normal updates and share the outlines just like I've been doing so far on this Kickstarter, but I also plan to posting more specific details on the Patreon page.

I'll plan to update you again in July if not sooner,

Lock and Key for 5e has been released! If pledge included a copy of the 5e version, you should have recently gotten an email from DriveThruRPG with a link for a free copy. If you don't see anything, message me through Kickstarter or email sneakattackpress@gmail.com and we'll get it sorted out.

If your got PDF add-ons on Backer Kit, those will be coming in separate emails later today.

Everything else is pretty much the same as the last update. Pathfinder 2e should be out next week, and Savage Worlds the week after that.

Thanks for making this possible!

P.S. Remember that we've not got a This and That Patreon! You can sign up now and won't be charged until book four comes out.

I just got the last of the art in for Lock and Key, and it looks good. That means that the 5e version is nearly complete. The only thing that I haven't finalized for the book: the list of backer credits.

As I write this, there are still 46 people who have not filled out their Backer Kit surveys. If you want to be listed in the backer credits, please make sure to fill this out. I'm going to give people a few days, then I plan to release the 5e version of the book this week, probably Wednesday or Thursday.

This is also the last call before locking orders of add-ons. I'm going to send out PDFs for add-ons of existing books around the same time.

Meanwhile the Pathfinder 2 version has come back from edits, and I'm going to start layout this week. I hope to have that out to backers next week. There are still a couple of things I need to convert in the Savage Worlds version and then have that edited. It looks like that should be out in early June.

After that I'll shift to Rope and Chain in earnest. My goal is to get that out sometime in July.

After much talk about it, I just launched the This and That Patreon. This Patreon will fund future books in the This and That series, like books about games, books, and more! I'm running this Patreon on a per creation model, meaning you'll only get charged when I release a book. And because the first three books were funded by the Kickstarter campaign, I won't start charging until we release the fourth book. You can still sign up now to make sure that you don't miss out and to participate in the discussion planning book four.

Because I know you are always looking for more crowdfunding opportunities, I want to give a plug for Magical Kitties Level Up! I'm not running this one, but I am involved as a writer/game designer.

Magical Kitties is an all-ages RPG, where the players take on the roll of kitties with magical powers that must defend their humans from witches, aliens, and the school bully. This is a great way to introduce your kids to RPGs or play a light-hearted game with adults.

The Level Up Kickstarter campaign expands the original games with new books and accessories, and also includes pledge levels with the base game.